Greenspond Courthouse to St.John's for a ride and a wedding!

As usual I was up early and set about getting myself ready for the day ahead.

I had found out that there was a special wedding taking place in St. John's on this fine Wednesday!
I packed my gear and took it down to the bike.
I headed back in to the house and the smell of fresh coffee and breakfast.

At 8:30 am sharp, the gentleman from the fishery stopped by with a jug of gas that I gratefully paid him for.

At just before 9 am, I headed over to the courthouse to meet the gentleman with the key.
Like all of the people I had met in Newfoundland so far, he was polite and engaging and very apologetic that the courthouse had not been open until 6 like the web site said it would be.
He explained that cut backs have made it so that staffing issues become a real challenge here, so when someone is not feeling well, like had happened the day before, there is no one to fall back on to keep it open.

I assured him it was no challenge and thanked him for opening it up early for me to visit. 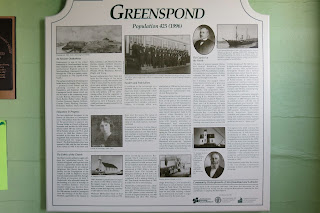 Having been settled in the 1690's, Greenspond is one of the oldest continuously inhabited outports in Newfoundland, and became known as the "Capital of the North" because of it's position on the main sea lanes.  The Greenspond Courthouse Museum contains a wide variety of artifacts that help to tell the tale of Greenspond.

This courthouse, which was built in 1900-01and embodies the Second Empire building style, has over the years served as a courthouse, a jail, jailers quarters and as a temporary morgue during shipping disasters. Today it is a museum that harbours precious relics and memories of a time gone by. William Henry Churchill, the man who designed this building, was the Superintendent of Public Buildings at the turn of the century when this courthouse was built and he was well known for using the Second Empire style as the foundation for many of his designs. This building is a designated heritage site.

The Greenspond Courthouse museum offers us many samples of the tools of the time, covering everything from shoe making to fishing.

There are many pieces of art including one from Louise Maude Saunders who was Newfoundland's first lady lawyer. 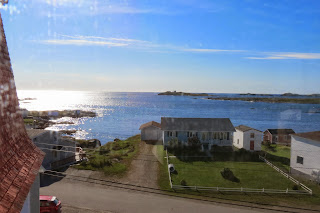 The view of Greenspond from the dormer windows in the tower of the courthouse - stunning is a word that comes to mind!

The Jail cells are still operable

Like every community in Newfoundland, there is a strong tie to the sea and the the military here and they are proud to display their heritage!

I took the opportunity to go to the top of one of the walking trails to take some photos of this ruggedly handsome community and region.

Pretty is not a word to describe it, beautiful and stunning don't do it justice.

This region simply takes your breath away.

I will let the photos show you the rugged beauty I find it hard to truly describe. 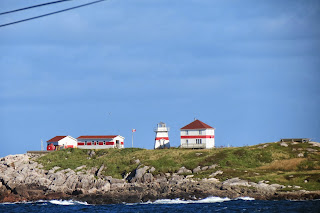 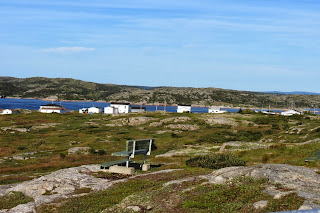 This place is hauntingly, ruggedly gorgeous. I would love to have spent more than a half of a day here.

I was treated with kindness, I was given help without a second thought.
The fact that I was on a motorcycle made me a rarity, but the fact is, these small places are seeing more and more riders venture off the beaten path.

I have heard a lot of the locals complain that you have to go up and back down the same road to visit a place.  But as a tourist, both directions of your trip up and down the same road can be anything you want them to be.  There are attractions, restaurants and interesting little towns all along the routes to the more remote locations and in some cases the larger tourist attraction regions like Twillingate.

You can stop at a few places on the way up and a few more on the way down and really, truly get to know Newfoundland.  So while the locals may tire of the same old roads, they are the very roads you and I as a tourist want to explore.

I wished that there were more hours in a day and more of me left at the end of each day so that I could have explored even more. This trip here has caused in me, a desire to come back and at this point in my trip, it was far from over.  But like many a rider, I was already mulling over what a return trip would look like and the places I would have loved to have explored this time will become what I explore next time.

My next stop after Greenspond was St. John's.  I was being met by Frank Gogos of the Beaumont - Hamel 2nd CAV and he was going to escort me into my fellow CAV member G Dawg's wedding.

It caught me completely off guard when I found out the wedding was on a Wednesday and that I could actually be there.  Frank and I pulled into the church parking lot where Frank handed me off to Debby Lake also of Beaumont-Hamel 2nd CAV. Frank had to get back to the foundry he works at.
I got to spend a few moments with G Dawg before his wedding, gave Tony from Moncton a great big hug and then it was time for the wedding.  It was a beautiful ceremony and I was so glad to be there and film it for him! After the wedding I had about 10 minutes to give my best to the bride and groom before Debby whisked me off.
She escorted me over the the NTV Studios where I was interviewed for the 6pm NTV newscast, to promote the ride we were hosting there.

After we got done at the studios we were off to get me checked into the Guv'nor Inn.

This is the kind of place a good number of riders will choose to stay in for the bulk of their vacation.
They are affordable, clean, have drive/ride up parking. They offer laundry facilities, have a pub on site for breakfast and supper and have some of the friendliest staff around.

We got me checked in and unloaded some of my un-needed gear like my clothes and then we headed over to Frank Gogo's house to wash my bike.

We shared a few laughs and a few giggles and then it was time to head to the Legion.
Peter Dawe of the Relic Riders was there with his Hummer that we used to sell patches from and a place to keep Rita out of trouble when I was busy with other things.

Somewhere around 15 - 18 bikes were in the parking lot. I chatted with each of them as I got their photos with Rita.  We had a quick safety and ride meeting and pretty soon kickstands up was called. 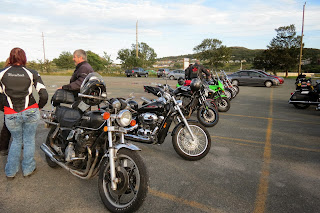 Sadly three of the riders couldn't come with us, but we none the less had a great time.  The road up to Cape Spear where we would be heading was twisty and winding, went through old sections of town out to much newer ones, and then we started to climb and the next thing I know Cape Spear and about 30 other bikes were there to greet us. What a glorious sight! 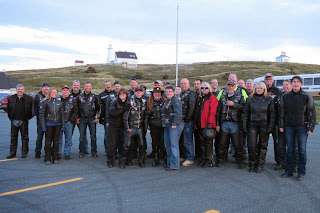 I was even more bowled over when I found out they were waiting here for us to arrive!

After pictures, registrations and a whole lot of hugs and photos it was time for me to share my plea about making the needs of our veterans an election issue and why.

Here is the link to an article that was written about my talk at the event:

After the talk we shared more hugs, more photo ops and pretty soon it was getting dark.
We all departed for various places, our little group stopped for gas and coffee and it was decided that we would go and crash G Dawg and Michelle's reception.

We had a blast.
We weren't there for very long as I needed to get to the tasks of charging cameras and clearing chips.
A few of the riders rode me over to the motel and we chatted outside for a bit, Debby stuck with me until I got to my room only, I couldn't get into my room. Neither key worked.

So, off to the front desk I went, got two more keys and was right back at the front desk.  The bewildered gal at the front desk met me back at my room, where we discovered housekeeping had not closed my bedroom window which turned out to be a good thing as that's how I had to enter my room.

I felt a bit creeped out at first but it appeared that the entire door lock assembly had failed.

After making sure nothing was missing and that I had everything I needed the gal from the front desk left the room. Debby and I chatted about the plans for the next day as I unpacked cameras and began the process of getting them ready for the next day.

The next day was to be more of an afternoon and evening for me.  I was going to take in the Newfoundland Foundry and get Screeched in on George Street but not before I got my Jiggs dinner!


Until next time, ride like everyone around you is blind and can not see you!
Belt Drive Betty
Editor & Rider
motorcycle newfoundland | canadian riders | rider friendly | motorcycle tourism
Posted by Belt Drive at 3:13 AM No comments: